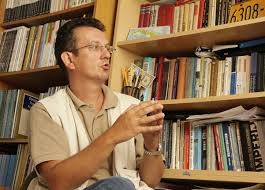 This text originally appeard on 11 February at: http://www.klix.ba/vijesti/bih/asim-mujkic-steceni-korak-slobode-ma-kako-mali-bio-nece-se-lako-prepustiti/140211028

“At the beginning, the political culture was badly articulated, but as time goes by we can see that groups of citizens are beginning to identify with their different interests, which is very good. We must give up old conceptions that  we are all speaking with one voice. Our society is pluralistic, but all the demands that citizens have put forward are essentially democratic aims. We are threatened with chaos, with weakening one or another nation, but I fail to see how democratization of political life can be seen as a weakness. This can only be the strength of a society, a token of maturity. From these protests we can conclude that we are at least at the threshold of political maturity” argues Professor Asim Mujkić.

The protests are already bearing results: changes of the leadership of four cantons and a shift in how those who govern view their own power.

“If these changes are not epochal after all, at least every future governing structure will know their positions can be easily challenged. What is important to me is for citizens, to slowly, and in a plural way, begin to articulate their subjectivities. We are all talking of democracy as a concept which envelops the citizen as a subject. This is what is happening right now, because we have signs of change of the dominant submissive culture which has been conditioned with the national reflex. There are various spin stories, but I think this vocabulary of ethno-nationalism is being thrown on the garbage of history,” argues the professor.

Considering this is an election year, Mujkić says, it is very difficult to expect epochal results of any new government, but he also adds that they will be now in a position to establish a new approach to how they treat citizens, to demonstrate a will and to show that steps will be taken towards fulfilling some of the demands of the protestors. Whatever happens, they must at least, lay foundations for every future government.

“We must not think that this is a finished process. Nothing is over. This is a process which we have entered and it needs time. But I believe we have the will for this. Our misfortunes are simply too great, to give up now. You did see yesterday [11 February] people from 30 cities rose, and in Republika Srpska the Association of War Veterans told Dodik that they will not be manipulated. The reasons which precipitated the protests are big and cannot be easily neglected. In the end, the establishment of civil society bodies such as the Plenum, and various other Assemblies, like the Bosnian Spring in Bihać, speaks of formations of institutions which are articulating or are trying to articulate the demands of the citizens. It is hard to believe that these initiatives will dismantle easily. A measure of freedom gained, no matter how small, will not be given up easily and disappear. As the anger and the protests are beginning to gain an institutional form, we are in a way reassured that this time we are serious, and that a mechanism is set to control the work of future governments, and to supervise that the protestors’ demands be met. Now we need more citizens to get involved, and to spread lists of demands.

Mujkić said that on Thursday [13 February] the University in Sarajevo would start with its announced strike, and their demands will be plugged in the Sarajevo plenum. He explained that the Law on Higher Education is directly against the autonomy of the University, because the Steering Committee counts at least five or six representatives of the Government against four of the University.

Commenting on the reaction of the politicians in power, the professor claims that such reactions are very predictable.

“Of course, political groups in power will do everything they can to keep their positions. They say they agree with the demands of the workers, but they also say they will not have the streets setting the agenda. If they agree with these demands, what have they been waiting for, for so long? Why didn’t they come among the people and ask them what is the problem, meet with them, help them? They agree, but they also turn their backs. Those people in power are at the heart of twenty years of violence, ethno-nationalist madness which has always homogenised them anew. I do not know who is the aggressor here, people who represent this system or those who have come out to protests with real and valid demands, as the politicians themselves have called them: justified demands. I hope their spin will not be successful, and I can see that they are not succeeding,” concluded Professor Asim Mujkić.